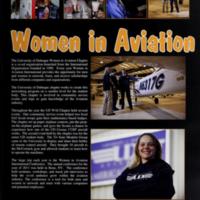 Since the Wright brothers made the first sustained, controlled flight in an airplane in 1903, the world of aviation and human flight has been evolving and changing. Early milestones include the use of airplanes to carry mail, in warfare, and of course, their revolution of the transportation industry. Amelia Earhart and Charles Lindbergh became household names as the industry took off in the first half of the 20th century. Unfortunately conditions in the aviation world mirror those of the culture at large, with discrimination facing aviators of color, and women. The developing field did not see a female pilot until Blanche Stuart Scott in 1910 (Freydberg, 1998). Even though women formed groups such as the Ninety-Nines and the Women’s Flying Training Detachment (WFTD) to support females in flight, discrimination remained a part of the industry (Freydberg, 1998). Undeterred in the face of such barriers, women continue to persevere.