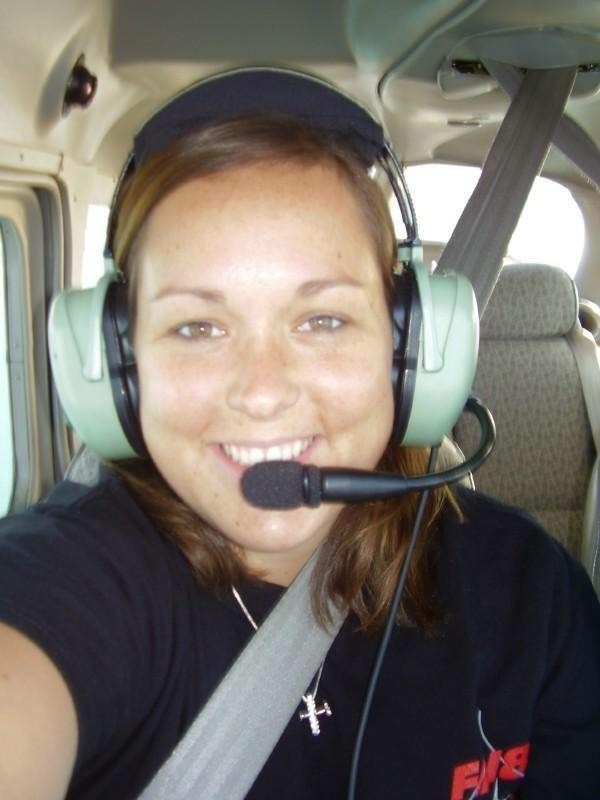 Elizabeth Wichmann graduated from the University of Dubuque in 2005 with a major in Aviation Management.  She grew up in Dubuque Iowa, and during her childhood had the opportunity to fly with her father a couple of times when he was asked to travel for work.  This is where her love for flying began.

After one semester at the University of Northern Iowa, Elizabeth made the choice to transfer to the University of Dubuque for a few reasons, a couple of them being the closeness to her family and the student activities (in particular softball and tennis).  But the main reason was so that she could pursue a career that she was passionate about in Aviation.  While deciding whether or not to transfer, she toured campus where she was able to take a test flight, which solidified her decision.

When she began the aviation program, she thought she would become a pilot, and although she loved flying, eventually she “…got into more of the business and management side of it too, and realized that there are a lot of careers available in the aviation industry that would allow me to be around airplanes.”  Among her favorite classes were a management class taught by Kevin Foley, where Elizabeth learned about Fixed Base Operators, and also a senior seminar class, where she learned how to interview.  In this seminar class, she had a mock interview for an airport management position, and would have been the interviewee selected for the position.

While she was at UD, she was with Gamma Phi Delta, and was a member of the flight team, which she found to be a lot of fun and was a good bonding experience.  She also remembers her first solo flight very well:  Her flight instructor didn’t tell her she was about to go up for her first solo, and when she arrived at the plane he told her “Alright go do your three stop and go’s.”  She says she was very nervous, and was signing to herself to keep herself calm.  “But it all went well and after that it was no big deal to fly by myself anymore.”

Also etched in to her memory is her first negative experience in a plane.  “I started to lose power in the aircraft and I was by myself so I started to run through my checklist, trying to figure out what was going on.  I had a blown fuse and I was trying to push it back in and it kept on trying to pop, so I advised the tower that I was coming in and that I was having issues and eventually I did end up losing radio communications but the tower had already cleared me to land but that was definitely terrifying for a student pilot.”

After graduating, she got a position in South Bend, Indiana in airport management, and then moved on to airport supervision in Lansing, Michigan before landing her current job with the Federal Aviation Administration (FAA) where she’s been working as an Air Traffic Controller for the last 10 years.

When asked about the ratio of men-to-women during her time at UD, she thinks that is was very small, that there were maybe 10 women out of the 100-150 students there, and recalls that in many classes she was the only woman in the room.  These ratios haven’t changed a lot in her professional life-  She was the only woman working in South Bend (out of 8 employees in her department), there were 3 women (out of 15) in Lansing, and there are 5 (of 17) in her current department.  Despite the numbers, she does not feel like she has been treated any differently, and states that she believes that there are more women entering the field.  “...more people knowing that it is a job available for them and the opening up to the public instead of it being CTI schools definitely helps.”