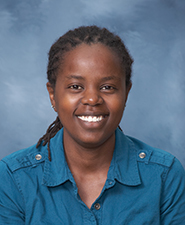 Joan Kariuki graduated from the University of Dubuque in 2016 with a Master’s in Business Administration.  She grew up in Nairobi, Kenya with her mother and two older sisters, and received her undergraduate degree in Aviation Maintenance Technology from Western Michigan University in Kalamazoo.

She first became interested in flying when she was 8 or 9 years old, when she took her first international flight (to Norway) with her girl scout troop.  During this flight, the attendants allowed Joan and the rest of the scouts turns at entering the cockpit and talking to the pilots. “I remember being up on the flight deck, talking to the pilot, looking outside the windows, looking up at the cockpit, seeing all the buttons and circuit breakers, everything, and then realizing that I really liked this office.”

When Joan decided she was ready to go to college, and remembered her experience as a child, she was initially seeking out programs to become a pilot.  However, at the time, the outlook for pilots was not looking great, and she also saw a newspaper ad that a local university in Egerton had a partnership with Western Michigan University:  Students complete 2 years in aviation or engineering, then they can complete the degree at WMU.  She really enjoyed the program, which included aviation materialistic technology.  “I had been tinkering all my life sitting right next to [my mother] watching her do stuff so it was not a big deal.”

After graduating from Western Michigan University, she began working for a maintenance, repair, and overhaul facility in Duluth, Minnesota, working on big jets.   This position was intimidating at first, but she quickly realized “these people were so willing, so eager to teach you just to pass on the knowledge.”

Wanting to remain in the know with aviation, Joan attended a Women in Aviation conference in Florida, where she also looked in to the schools that offered aviation programs.  The recruiter for the University of Dubuque sold Joan right away, and she decided to come to the University of Dubuque- not to get a further degree in aviation, but instead to obtain her MBA.  While going to school at UD, she held a work study position at the airport, washing planes, writing papers, and creating the informational documents on safety in the airport.

After she graduated with her MBA, a position with the University of Dubuque opened up that she applied for, which she still holds today:  Aviation Maintenance Assistant.  Here she performs some of the maintenance on the places and always makes sure everything is airworthy and safe for the students.  Along with maintaining the aircraft, Joan is also in charge of making sure the flight simulators work, and does some of the teaching in classes.

While taking classes through Egerton and Western Michigan University, she recalls that her class had the highest number of females:  there were four women in a class of about 20.  She also mentioned about her time working in Duluth, “You think my class ratio was bad, the facility had about at most 10 females that worked there in a facility of about one hundred+ people in general.”  At the University of Dubuque, she currently has one female student, who is actually not a part of the aviation program.

When asked how to reach out to get more women interested in aviation, she states that STEM programs would be very helpful, and letting women see and meet the women that are there doing the jobs.  “People … get shocked and amazed that you even exist, and that you do what it is that you are doing.  But again you are opening up their minds to possibilities to what the future is going to look like. Yeah, females are here.  Black females are here.  We can do just as well as you can, we can do just the same as you can.  It’s not a matter of being female, it’s not a matter of race.  It’s just, this is what I want to do.”