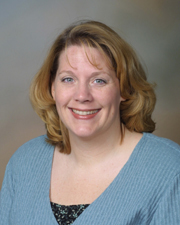 Polly Kadolph, a current UD faculty member, graduated from the University of Dubuque in 1991 with an Aviation Management major and a Flight Operations minor.  She transferred to the University of Dubuque from UW Eau Claire as pre-med major who was taking flight lessons for fun.  When she started at UD, she felt that “it was a stark change from a large college to a small college”…”it was a connection, I knew I was going to belong and I was just excited to get started”.  She has gone on to become the first full-time female faculty member in the UD Aviation Department, and is currently an Associate Professor of Aviation at UD.

While attending UD, she pledged AER.  WIA was started after she came back as a faculty member, after a group of female students came to her and said they wanted to start a chapter on campus, for which active student female aviators did the bulk of the work to organize.  She was also the flight team captain when she was a senior and went on to coach.  Her most memorable class was Ground schools – “camaraderie, accelerated pace, you learn a whole lot.”

While a student, she remembers that there were maybe 4 women that were flying and a few others in the programs – maybe around 10.  Now days, she thinks the number of women in aviation at UD has stayed relatively constant. “I think STEM activities help; that is why I am passionate about why we do the Girls in Aviation Day every year…”

When asked if she feels that being a female was an obstacle, she replied “At the University proper, I felt very supported.”  However went on to say that, as a faculty member, “I did get a student assigned to me and ask not to have a female flight instructor.”
“I would love to see more women in aviation…varied backgrounds of any sort bring varied gifts and talents that can really make the end outcome phenomenal – I’ve felt like that’s an advantage that we can have in the cockpit, and that goes with any group…”

She’s asked often about what it is like to be a woman in aviation/why more women aren’t in aviation. “My personal opinion would be that the industry itself was male-dominated for so long, and para-militaristic in how it was ran, so the schedules are bit…there is not very much flexibility. I think that if a pilot shortage continues long enough, I think that there will be pressure now, because men and women both, more and more men are involved hands on with raising their children too, and so I think just as a pilot work group, there will be pressure to have these work schedules be more a quality of life issue…”

In June 2018, 2 UD Aviation students participated in the 42nd annual Air Race Classic.  About this, Polly states “It was the first time ever that UD has participated…It has its origins all the way back to the Powder Puff Derby with Amelia Earhart….I think that it helps those young ladies know going forward there is really strong, strong women behind them, there is a lineage of people that have fought hard for us to be making improvements and be accepted in the industry as women that are strong pilots and know what they’re doing, work hard to keep their knowledge abreast, and I think those three gals really were able to meet some fantastic role models…”