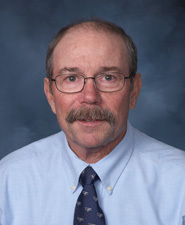 Mike Glynn graduated from the University of Dubuque in December 1976 with a degree in Flight Operations and Aviation Management, and is currently the Chief Flight Instructor at UD.

Mike grew up in Dubuque.  He doesn’t remember what first sparked his interest in flying, however his two big influences were Rodney Arends, the Chief Flight Instructor at UD, and Bob Ryder.  Mike took the course Basic Ground School as an elective, of which Bob Ryder was the enthusiastic professor that convinced him to pursue a career in aviation.

During his time at UD, Mike was involved with AER and the flight team. He was a charter member of AER and they went on trips.

He thinks that 10 or 20% of students were women- there was one in every class.  Mike adds that the women in the program weren’t treated any differently.

After graduating from UD, Mike taught at a private flight school, but then came back to UD to work from 1979-1998 and again in 2003-today.  He remembers there not being many female flight instructors at UD when he first joined the staff.  However he does think that there is steady growth of women in the industry.